It might be a little crazy to talk about this right out of the gate, but my hope is that someone will read this and relate to my story. Now let me just say that this is my experience and how I felt about what I went through. I hope I don’t offend anyone with this. You might not have the same opinions or the same experience, but this is mine.

When I found out I was pregnant I was

so excited! I always planned on breastfeeding.  I knew it was the best thing for my baby so there was no question for me. I don’t know the politically correct way to say this, but I’ve always been a very “busty” girl. Having a larger chest I thought that it would be an all you can eat buffet for my baby, and that it would be so easy. Oh how wrong I was!

After having my baby I started breastfeeding and it was about as good as you could hope for. He latched pretty easily and it wasn’t too painful at first. I thought that it was going well until we went to his three-day doctors appointment. The doctor told me that my son had lost more weight then he should have and he suggested that I supplement with formula and try pumping on top of breastfeeding, until my milk came in better. So I would breastfeed for about 15 to 20 minutes on each side, and then I would pump while my husband would give him a bottle of formula. I hardly got anything pumping at first, but that was to be expected since I was also breastfeeding. As the days went on I was slowly getting more milk while pumping, and I was s

o happy that it was working. Then we hit a road bump.

Two weeks after he was born I got Mastitis. Ouch!!! Anyone who has had this can tell you that it’s extremely painful. I remember crying the entire time he would feed and counting the seconds until it was over. When I finally got so miserable I couldn’t even fathom him latching one more time I called the doctor and got on antibiotics. Looking back I wish I had called the doctor earlier and not waited so long. While having Mastitis pumping wasn’t nearly as painful as the real thing, so my plan was to pump and bottle feed for a couple of days until the medicine worked its way into my system. It was a lifesaving, giving me a little relief when I thought I was going to die. I figured we could pick up right where we left off when I was ready. Again, how wrong I was haha.

Once my boobs stopped hurting so bad and I knew I would be fine to start breastfeeding again I tried to jump right back on it. Benson was not interested in breastfeeding AT ALL! 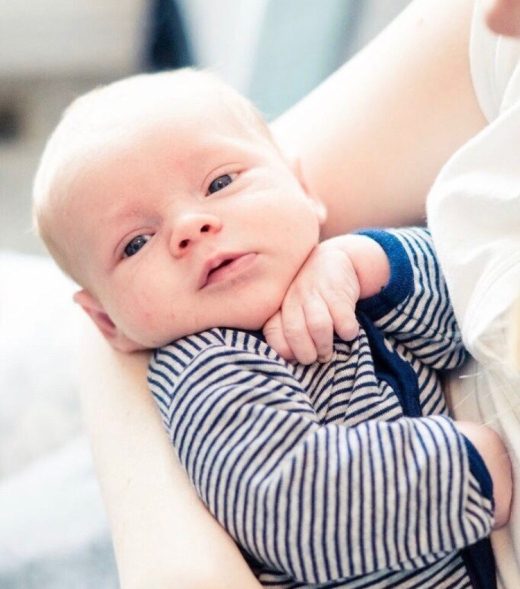 They say it’s easier for a baby to get milk from a bottle then from breastfeeding. I had no idea that just 2 days would make that big of a change. He wouldn’t latch and even when he did it was only for a couple of seconds and then he would stop. I was so sad that he wanted the bottle but I wanted my baby to eat and truth be told I’m a bit of a push over so I would give him a bottle. It took me awhile but I finally gave in and just decided that I would pump and bottle feed from now on. It wasn’t my ideal choice but at least my baby was still getting breast milk, so I was okay with it. Also that way I could tell exactly how much he was eating, because you really can’t tell what they eat when you breastfeed. My husband also loved being able to feed the baby just as easily as I could. I think it made him feel more connected to him, and like he was helping out, which I was totally fine with.

Benson was a big baby! When he was born he weighed 9 pounds 1 ounce. So right off the bat he required more milk then a smaller baby would. He was eating full 4 ounce bottles by the time he was a month old. That little boy was hungry! As I started pumping to replace feedings I noticed that I wasn’t quite getting as much as he needed for a feeding. I would start combining bottles to make 4 ounces. Unfortunately my supply just kept dropping and dropping. It really stressed me out and we all know that stress is the worst thing for your milk supply but I couldn’t help it. I would pump and watch every drop. By the time he was 5 weeks old I was barely getting anything. I would pump for a full 20 minutes on both side and get a total of maybe 2 ounces. It was so frustrating. But I wasn’t giving up that easy. I had read an article about Power Pumping. So basically you pump every two hours and then wait for 10 minutes, and then pump again. Supposedly it tricks your body into producing more milk.

I did that for 3 days and it made absolutely no difference for me.  Basically I was barely sleeping because I was waking up at all hours of the night to pump. It was exhausting! I was killing myself trying to pump all the time! I tried breastfeeding teas and oatmeal and all kinds of stuff, but nothing seemed to make any difference.

I think anyone who has had a baby can tell you that after you give birth you are very emotional because of the hormones or at least I sure was. I was emotional, trying to recover from a tough labor, and so tired I was like a zombie! The thought that we now needed to take other steps and do formula made me so sad. I felt like I was letting down my baby. I was frustrated with my own body thinking “Why can’t I feed my own baby?” I was embarrassed to admit that I couldn’t do it. It was a really rough month for all of us. I cried pretty much every day, thinking that I was a terrible mother. Finally we made the switch to formula. We would still feed him as much breast milk as possible until my boobs finally dried up completely and I wouldn’t get anything at all pumping. And honestly everyone was happier. My baby was full and happy. My husband didn’t have to deal with his wife crying all the time, and I was finally able to take the time to be with my new little family instead of pumping 24/7. I just had to get over the idea I had in my head for how I was supposed to feed my baby.

It’s so silly to me now how emotional I was over the whole thing. If I knew someone else who was feeling that way it would be so easy to tell her not to be so hard on herself. But it’s so much harder to take that advice from yourself. Deep down I knew that formula would be just fine for my baby. They make such great formulas now and there are plenty of babies that grow up on formula and they turn out just as great! I would never judge another mom for feeding her baby formula so why did I judge myself so hard? There is no special college that breastfed babies go to. They don’t hand you a special diploma when you graduate from high school if you’re breastfed. I wish I could go back and yell at myself “Why are you killing yourself over this when you know that formula can be just as good?” I think I had an idea of what breastfeeding would be and when it wasn’t that way for me it meant I was a bad mother. That is crazy! If anyone is reading this that is going through something similar I just want to say that feeding the baby is the most important thing! Whether you breastfeed, pump and bottle feed, or formula feed, it’s all the same. As long as your baby is getting food that is all that matters! Stop being so hard on yourself and just enjoy the time you have with them. Time seriously flies and I wish I hadn’t wasted some of it with all the worry and stress. Being a first time mom I didn’t know any better. All I knew is that I wanted to give my little baby the best I could and didn’t realize that no matter how you do it, it is the best.